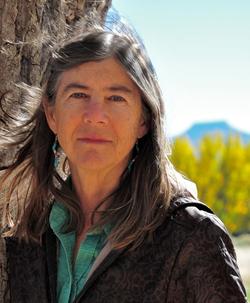 Connie Wanek was born in 1952 in Madison, Wisconsin. She is the second of six children. Her family moved to a small farm outside Green Bay when she was very young, and they relocated to Las Cruces, New Mexico when she was twelve. In 1990 she moved with her husband, Phil, and her daughter, Hannah, and son, Casey, to Phil's home town, Duluth, Minnesota, where she now lives.

As a child in the country outside Green Bay, she attended a one-room school, where a single teacher taught all eight grades (no kindergarten) to seventeen students. Connie and her sisters read a great deal, and drew and wrote poems and stories. Later, in high school and college, Connie retained her interest in the arts, and also she participated in sports, especially tennis, which she played seriously for many years, along with her father and brother.

Poetry was a constant, whatever her circumstances and enterprises. While raising two children, she worked in a family solar heating business, and later she learned the skills necessary to restore old houses. Also, she worked for years at the Duluth Public Library, from which she retired in 2007.

Her first book, Bonfire, won the New Voices Award and was published in 1997 by New Rivers Press. Her second, Hartley Field, appeared in 2002 from Holy Cow! Press. On Speaking Terms, her third book, was released on January 15, 2010, by Copper Canyon Press. Her newest book of poetry is Rival Gardens: New and Selected Poems, published by University of Nebraska Press, the second in the Ted Kooser Contemporary Poetry Series.

Wanek's poems have appeared in Poetry, The Atlantic Monthly, The Virginia Quarterly Review, Great River Review, Poetry East, Water-Stone, and many other publications over the years. In 2006, US Poet Laureate Ted Kooser named her a Witter Bynner Fellow of the Library of Congress. She also served as a co-editor with Joyce Sutphen and Thom Tammaro on the comprehensive anthology, To Sing Along the Way: Minnesota Women Poets from Pre-Territorial Days to the Present, which appeared in 2007 from New Rivers Press, and which has won several awards. In 2014 she also published a book of prose, ten stories, called Summer Cars with Will o' the Wisp Press. Wanek was deeply honored to receive the George Morrison Artist of the Year Award in 2009, which recognizes an individual artist whose body of work has made a significant contribution to the arts in Northeastern Minnesota.